Many UK cyclists do not feel safe cycling on our roads, according to new research from National Accident Helpline.

UK cyclists do not feel safe cycling on our roads, according to new research from National Accident Helpline, the UK's most experienced claims company. This comes at a time where cycling in the UK is on a massive high, boosted by our 2012 Olympic success and the national enthusiasm from hosting the Tour de France this year. 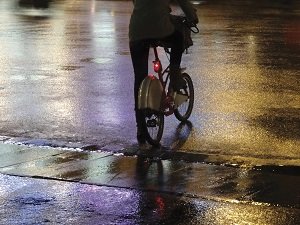 The research revealed that two fifths (42%) of cyclists do not feel safe cycling in designated cycle lanes and over half (53%) feel nervous when cycling in the dark.

The findings coincide with the end of British Summer Time this weekend, with days getting shorter and evenings darker as the clocks go back. According to Transport for London, over a third of cyclists are injured in the early hours of the evening. In Greater London, up to 34% of cyclists were injured around dusk between 4pm and 8pm.

Despite worries about cycle safety, over a fifth (22%) of respondents said they listen to music when cycling, adding an additional distraction to their journey.

With the research revealing how nervous cyclists feel when cycling in the dark and the increased vulnerability that winter brings, here are our recommendations to make sure you stay safe:

More and more Britons are following Bradley Wiggins and getting inspired by the Tour de France to hop on a bike. Unfortunately this rise has been accompanied by a sense of nervousness when it comes to road cycling.

As the nights draw in and winter approaches, this is the perfect time to tackle that anxiety by ensuring that you are prepared for cycling in the dark. As long as you take the necessary steps to ensure you are well prepared and keep your wits about you, there is no reason why the winter should be a hindrance.

Thorough car maintenance is an important aspect of keeping safe while driving.

Today, we are unveiling our new creative campaign for 2020, centring on our legacy of helping people all over the UK.The...

The 21-year-old met with Paul Maynard MP, Parliamentary Under Secretary of State at the Ministry of Justice