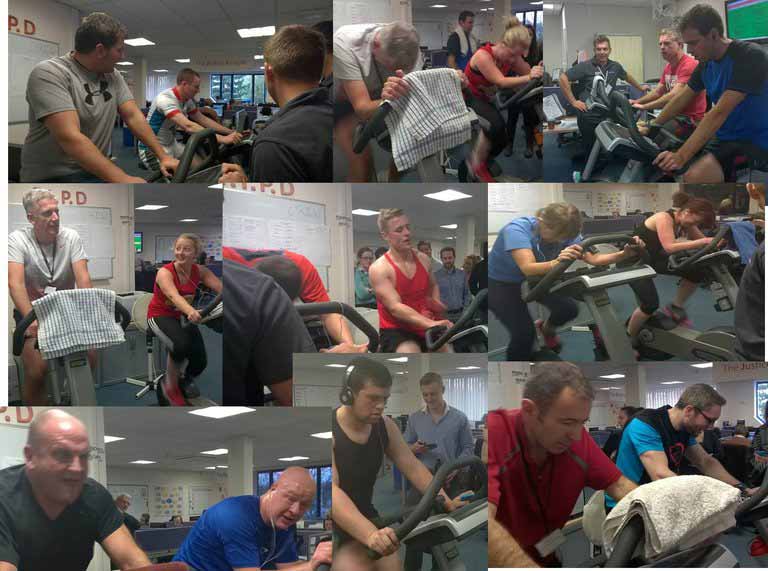 Directors at National Accident Helpline have been battling against the rest of the staff in a tough cycling challenge to raise money for company charity The Air Ambulance Service.

Earlier this week two teams of eight - Team ‘Directors' and Team ‘Rest of NAH' - went head-to-head on stationary bikes in our Contact Centre to see which team could cycle the distance equivalent to the height of Mount Everest (8,848 metres) the most times during the course of the day. Each of the 16 contenders had to cover as much distance as possible in a 30-minute slot - and they are a very competitive lot! After a hard-fought battle Team ‘Rest of NAH' were triumphant, cycling a combined total of 147.37km (62 times to the top of Everest), while Team ‘Directors' came a close second with 142.01km (60 times to the top of Everest).

Since the charity partnership was launched in April, National Accident Helpline has raised £9,700 for The Air Ambulance Service through a wide variety of events and challenges, including the 167-mile Way of the Roses cycle; the 5k and 10k Mud, Sweat and Beer challenge; a day of dragon boat racing, quiz nights, a multitude of bake sales and the £50 Challenge, which saw two teams compete to see who could raise the most money from an initial stake of £50.

Mayor Boris Johnson will be in Southwark, south London, to officially start work on the £160m "superhighway" which will stretch for more than three miles from King's Cross to Elephant and Castle.

The new ABI code – what does it mean for road traffic victims?

According to the ABI, the new code of conduct will protect the interests of accident victims by limiting the practice of third-party capture but code of conduct doesn't go far enough in challenging dubious practices.