National Accident Helpline Success Against the Odds animation competition winner Matt Rogers toured the studios of Oscar-winning Aardman Animations in Bristol after beating other entrants with his 10-second animation "Against All Odds".

Entrants to the competition were asked to take up the theme of ‘Success Against the Odds' to create short animated films in any format from CGI to stop-motion animation. Anglia Ruskin University graduate Matt Rogers, who now lives in Maidenhead, created a 10-second short which depicts a man's journey from being wheelchair-bound to competing as a Paralympian at the London 2012 Olympics. 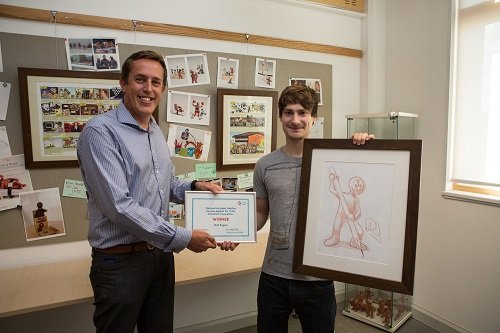 The theme of success against the odds was chosen because it reflects National Accident Helpline's championing of the underdog, helping injury victims to overcome adversity. Matt's winning entry, which you can view below, perfectly encapsulated this theme.

This was a well-crafted idea that worked well in 10 seconds, with a strong before and after. We particularly liked the fact that you could see the point where our hero decides he can do more,

We share Aardman's enthusiasm for Matt's entry. For me he stood out for his ability to move the viewer with such a short film,

His interpretation of the theme was spot on.

As a reward for his creativity, aspiring animator Matt won a money-can't-buy tour for himself and a friend of the studios where household characters Wallace and Gromit, Morph and National Accident's Underdog were created. He also won a Morph-making session, creating his own clay model just like those used by Aardman Animations in their work.

And in a great show of generosity, Matt invited competition runner-up Matt Bannister, a friend from his University course, to join him on his special day in Bristol.

Speaking about the competition and his prize, winner Matt said:

Thank you so much National Accident Helpline. Your ‘Success Against the Odds' competition has been fantastic.

The prize of visiting Aardman Studios in Bristol really was a once-in-a-lifetime opportunity. It felt like getting the golden ticket to ‘Willy Wonka's Chocolate Factory'! It was incredible, and completely unforgettable. The most memorable part was when I got to visit the model-making room and could take home my very own ‘Morph' model.

It was very interesting to talk to an Aardman Director about the animation industry. I had such a good time, it was very sad to leave! It was without doubt one of the best experiences of my life.

And Matt even made a two-minute video chronicling his day in Bristol, which you can watch below.