Cyclists on the road

Are you aware of the new Highway Code proposals? We explain the new rules that could be on the way.

The Highway Code sets out the rules and regulations observed on UK roads, and the newest proposed changes are particularly important for cyclists.

Following a review in 2018, new rules have been proposed that will protect vulnerable road users, namely cyclists and pedestrians.

Some of the potential changes include introducing a ‘road user hierarchy', effectively giving priority to pedestrians and cyclists over motorists that are turning. Other changes include new rules on leaving enough space when overtaking cyclists on the road.

Cyclists are undoubtedly some of the most vulnerable road users, but just how many people travelling on two wheels are aware of the current rules and proposed changes in place to offer them protection? We decided to investigate.

How aware are cyclists of the changes to the Highway Code?

In our survey of 1,000 cyclists, four out of ten (41%) were not aware of any upcoming potential changes to the Highway Code.

Although some were not aware of the proposed changes, most cyclists were happy to hear about it.

Only 3% of those surveyed viewed the potential changes in a negative light, perhaps unsurprising given the protections potentially set to be afforded to cyclists.

Almost four in ten (35%) viewed the potential changes in a positive light.

Female cyclists turned out to be slightly more clued-up on the new changes than men, with only 39% of women unaware of the changes compared to 44% of men.

Older cyclists were found to be less aware of the changes than their younger counterparts, with seven out of ten (70%) of 55-64-year-olds unaware of the new proposals.

How well do cyclists know the Highway Code?

It seems that a few cyclists need to brush up on the Highway Code, as over half (51%) of cyclists that were quizzed on the current rules got their answers wrong. 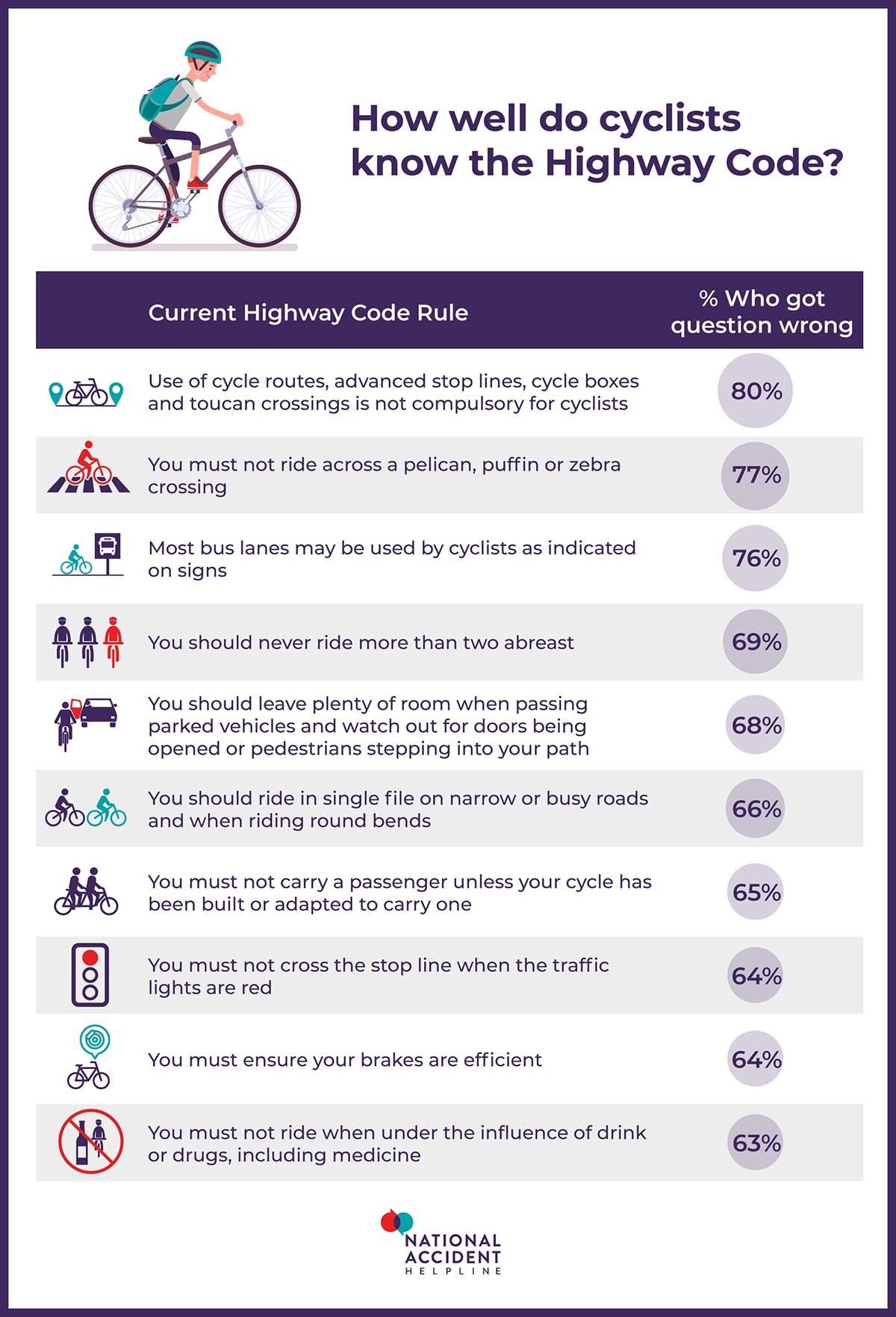 The good people of Edinburgh are most in need of a refresher lesson, as 54.4% got their answers wrong, a higher rate than any other city.

With 54.2% and 53.8% getting their answers wrong respectively, residents of Birmingham and Belfast also scored poorly.

Sheffield residents scored the highest, with only 41.4% of those surveyed getting their answers wrong.

What do cyclists want from the Highway Code?

The cyclists were also asked which rules they felt should be part of the Highway Code, with some answers proving particularly popular.

Six out of ten cyclists (62%) agreed that it should be mandatory to wear a cycle helmet which conforms to current regulations, is the correct size, and is securely fastened.

Cyclists agreed that they should have to…

On the flip side, this surprisingly reveals that almost four in ten cyclists (38%) don't agree that cycle helmets should be compulsory on UK roads.

The danger of accidents is real 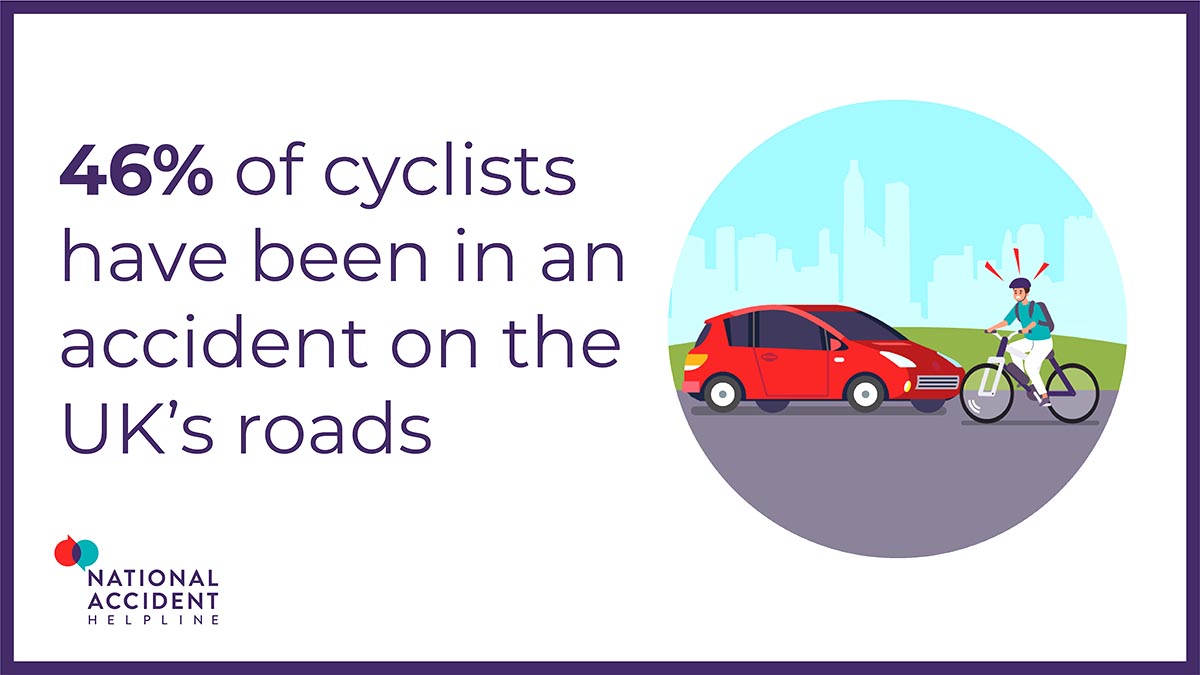 Younger cyclists had also experienced more accidents. Over six in ten (65%) 25-34-year-old cyclists surveyed had been involved in an at least one accident on UK roads, versus just 17% of those aged 65 and over.

Overall, over half of those aged between 18 and 44 (58%) had been involved in a one or more accidents when cycling. 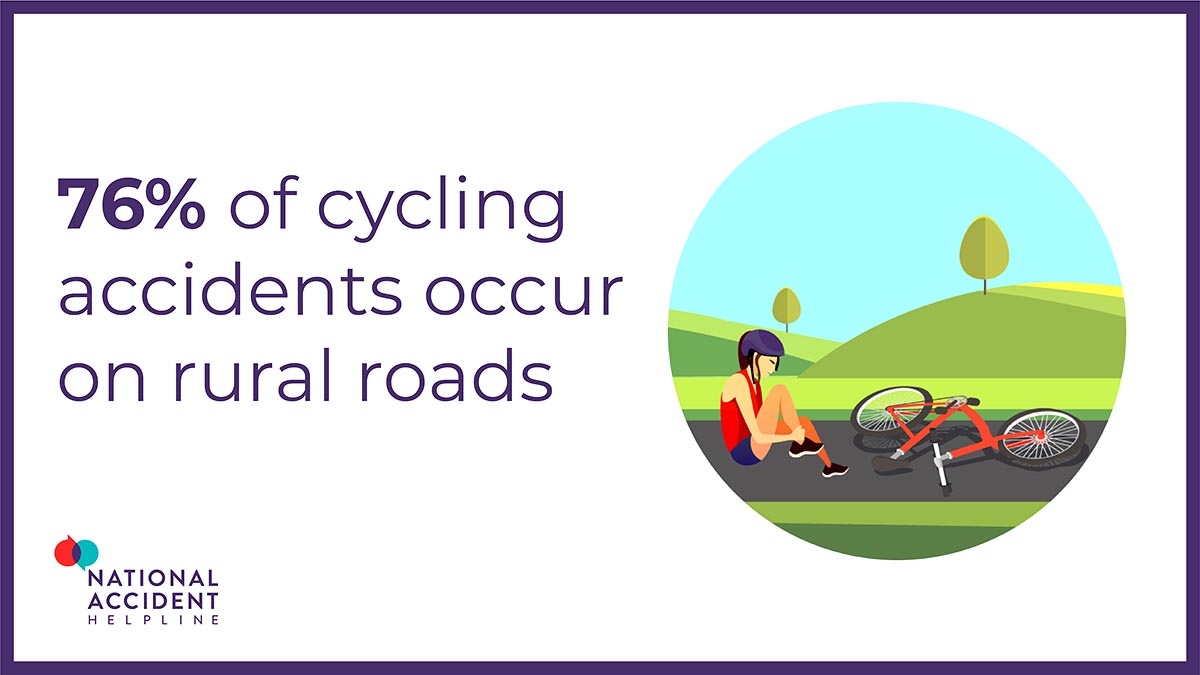 Most accidents took place on rural roads (76%), with a further 22% taking place in city centres.

More than one in five cyclists have been involved in an accident that required medical attention (23%), and the most common form of accident was a collision with a car (17%). A further 13% collided with a fellow cyclist.

What is the most dangerous city for cyclists?

Belfast emerged as the most dangerous city for cyclists, as seven in ten (70%) of those surveyed had been involved in an accident. The next most dangerous were Manchester (60%), and London (56%).

Sheffield was comfortably crowned as the safest city for cycling, as only 11% of those surveyed had been involved in an accident. Cardiff (26%) and Leeds (27%) also scored well.

The statistics show that the danger for cyclists on UK roads is a real one.

With just their bikes and protective clothing between them, the road and other vehicles,  as the study highlights, many cyclists have been involved in accidents whilst out on the road - so making sure that drivers and cyclists know and follow the rules is the best way to prevent accidents from happening.

The research was informed by a survey of 1,000 UK cyclists and conducted by TLF Panel, which is owned and operated by TLF Research, in September 2020.

The survey consisted of questions on UK cyclists' experiences whilst cycling on UK roads, their understanding of the current Highway Code and what they would like to see included as part of the Highway Code in the future.

The injury risks of using e-scooters

E-scooters rentals are currently being trialled across the UK, but what are the safety concerns for riders and other vul...

Lockdown transport habits will lead to a...

We investigated the link between the British public’s mobility choices and the resumption of road safety concerns.

How much will you be out of pocket if yo...

We crunched the numbers to find out the locations with the highest medical costs, and just how much patients must pay.