We investigated the link between the British public’s mobility choices and the resumption of road safety concerns.

So, how will the country get around once lockdown restrictions are lifted? We found out.

With the country experiencing at least some level of lockdown or social distancing measures over the past 12 months, many of us saw our transport needs drastically change. As the daily commute was no longer a part of daily life for the majority of workers and with social activities also limited, our latest research shows that many of us have changed our preferred modes of transport, leading to almost a million less cars on the road in 2021.

According to the latest figures from the Department for Transport, the lockdown measures imposed on the country during the national lockdowns led to a significant shift in our preferred methods of transport since March 2020. 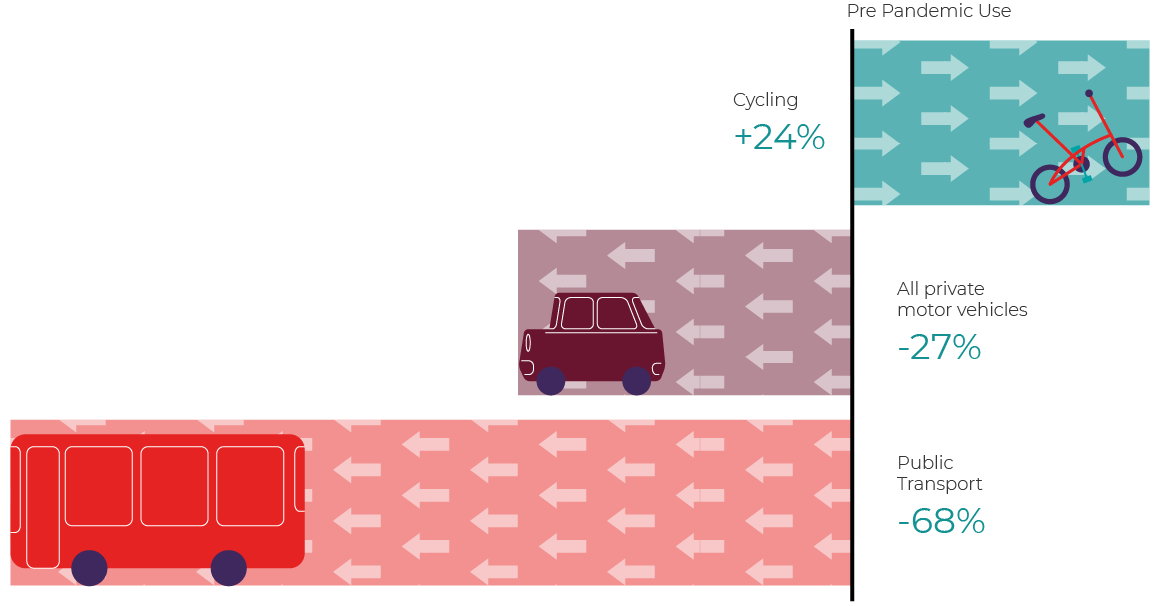 With the rise of working from home replacing the need to travel to work each day for the majority of the country, there was a significant reduction in the number of people getting behind the wheel of a car or jumping onto public transport.

When compared to pre-pandemic levels, there were an average of 27% fewer private motor vehicles on UK roads between March 2020 and March 2021, and a 68% decrease in public transport passengers during the same period.

However, while many were simply staying in the house, it does seem that some swapped their usual mode of transport for two wheels, with almost a quarter more cyclists (24%) on the roads in the last year.

While the measures taken over the last 12 months to limit the country's movement were a necessity in order to ensure everyone was as safe as possible, will our new transport habits continue once the country returns to ‘normal' in a post lockdown world?

With the government's roadmap out of lockdown already underway, we decided to investigate the country's intended transportation habits moving forward, to gauge how the changes could impact the road safety of vulnerable road users.

As we begin to exit the third full national lockdown, we asked 2,000 members of the public for their transport plans once the lockdown restrictions have fully eased, to see if the increase in vulnerable road users will be long lasting, and how these changes could affect the country's feelings of safety when out and about.

According to the poll data, the large shifts in transport use shown during the lockdown months will be replaced by a more minimal shift once lockdown measures are eased.

While the data indicates that many of us will be returning to our transport habits of the pre-pandemic world, the movements that are shown imply a movement away from cars and public transport and towards more vulnerable methods such as cycling and walking.

The study revealed that the number of people using their car as their main mode of transport is set to drop by 2.5%, even after restrictions have been lifted, which could see as many as 970,00 less cars on the road compared to pre pandemic levels.

There will also be fewer people (2.6% less) using public transport as their main method of transport.

In moving away from cars and public transport, British people are reporting an increased reliance on more vulnerable methods like walking and cycling. The number of people reporting walking as their main mode of transport is set to increase by 3.5%, and cycling is expected to be up 2%.

To understand how these shifts will impact the country's roads once restrictions are lifted, we also looked into the individual transport shifts for each respondent.

A quarter of respondents (26%) who will be cycling as their main mode of transport once lockdown restrictions have lifted will be giving up their own car as their main method of transport. Although, the majority (60%) of new cyclists stated they were not concerned about an increased risk of having a road traffic accident by switching to cycling, despite the increased risk of accidents when navigating roads on a bicycle.

Cyclists have much less protection than other road users when out and about. However, respondents stated that this wasn't a worry as they “feel that using my bicycle responsibly creates no greater risks. In fact, by using cycle lanes and paths maybe even reduces the risk”. Another respondent stated that “there wouldn't be any risk as I'll take precautions and will be more alert”, indicating that the majority of new cyclists could be underestimating the heightened danger of cycling on UK roads.

For the minority of new cyclists who recognise the greater potential risk of accidents when riding a bike, the key concerns focus on the actions of other road users and the protection offered on a very different urban landscape in the post lockdown world. Cyclists said that “many people don't respect bikes” and “some drivers are incredibly careless around cyclists”, while also highlighting that “once lockdown ends, the roads will be busier and more congested” due to the number of people moving away from public transport.

This congestion will be made all the more confusing for new cyclists with ever changing cycle lane changes, as highlighted by the recent announcement of rebuffed plans for a flagship cycle lane in central London, causing one cyclist to say that “cycle lanes are not good enough”.

Which regions have seen the biggest rise in vulnerable road users? 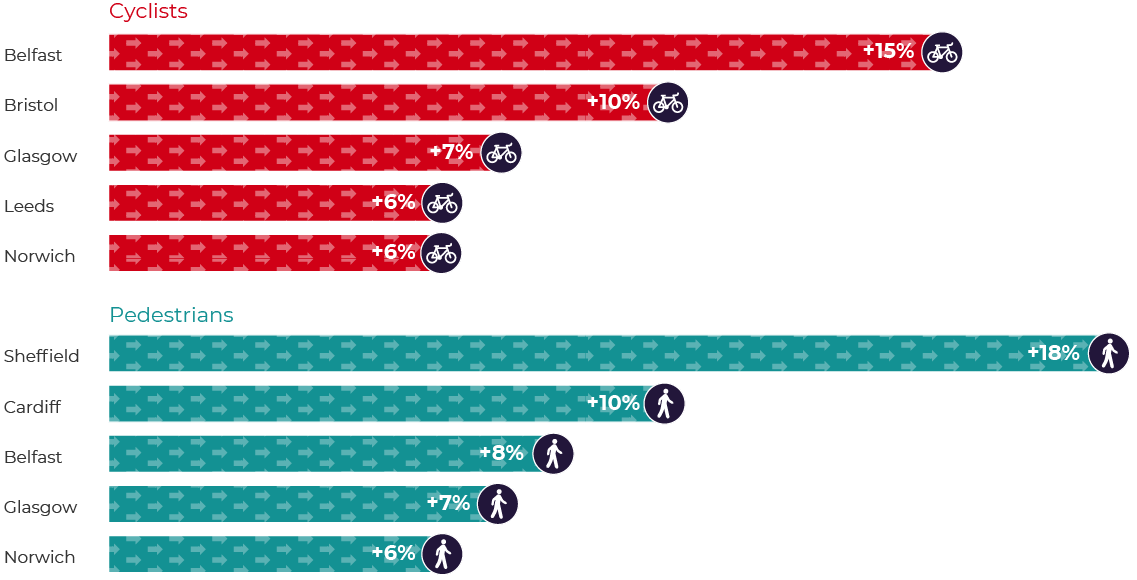 Which regions have seen the biggest rise in vulnerable road users?

The data indicates that Belfast roads will see one of the largest shifts in motor vehicles on the road, with a 15% decrease in residents using their cars and a corresponding 15% rise in those using cycling as their main method of transport. Bristol residents are planning on a similar shift, with 14% less car use and a 10% rise in cycling.

Respondents from Sheffield showed the largest increase in making walking their main mode of transport once all lockdown restrictions have lifted, with a 18% rise in people giving up all other modes of transport. Cardiff will also see an increase in people swapping the roads for pavements, with a 10% increase in walkers in the Welsh capital.

Moving to cycling and walking is not for everyone however, with a 5% decrease in bicycle use predicted in Newcastle and a 3% decrease in walkers in Liverpool. The Merseyside city will also see a 3% rise in cars on the road, along with a 1% rise in car use in London.

Even once the population is back on the road in greater numbers, the predicted rise in the number of vulnerable road users will ensure a very different urban landscape to the one that existed prior to the lockdown measures taking effect.

Having gotten used to much quieter roads during the year of lockdown, all road users and pedestrians will need to ensure they are aware of the accident risks once traffic levels begin to increase again.

Due to the need for social distancing meaning many pavements were extended into roads or even areas being totally pedestrianised during the lockdown months, the country will have become accustomed to a quieter road system than usual. This could lead to many road users being less aware of the risk of accidents that could occur once congestion levels begin to rise again once restrictions have lifted.

Cyclists and Pedestrians are some of the most vulnerable road users, with very little protection if an accident does occur, so it is important to take extra care when out on the roads, especially if you have recently switched to a new mode of transport.

Find out more about the claims process
Share this news post:
News categories:
TrustScore 4.7
20,925 reviews
Back
Index
Next

Tackling the disparity in compensation f...

Four months on from the government’s whiplash reforms, we look at how the changes have affected compensation for back in...

Keeping safe on the roads

Data shows that road use is returning to pre-pandemic levels, but are we aware of what it takes to stay safe?

Ensuring safety in the workplace

With data suggesting the country is about to see a return to the office in numbers resembling pre-pandemic levels, we as...