We reveal Britain's most superstitious cities

Do you avoid walking under ladders and hate the idea of breaking a mirror? We reveal the most superstitious cities in the UK.

During the inaugural Accident Awareness Week we've been urging the British public to take extra care, with the aim of reducing the number of avoidable accidents in the UK.

However, as today is Friday 13th you may be concerned that your own safety is in the hands of fate on what is often considered the unluckiest day of the year. At National Accident Helpline we're urging people to cast superstition aside and recognise that accidents are more likely to be caused by a lack of care than by walking under a ladder.

As part of Accident Awareness Week 2015 we commissioned CensusWide to carry out a nationwide poll to discover the UK's most commonly held superstitions and reveal the nation's most superstitious city.

Of the 17 major cities represented in our survey, Belfast came out on top as the nation's most superstitious city. On average, more than half (51.89%) of people living in the Northern Irish capital believed that the things they were questioned about were either good or bad luck.

Of all the superstitions we questioned them about, respondents from Belfast were most likely to be superstitious about walking under ladders (63.2%). They were also more likely than the rest of the UK to believe that seeing a black cat, spotting a single magpie or walking over three drains was either good or bad luck. 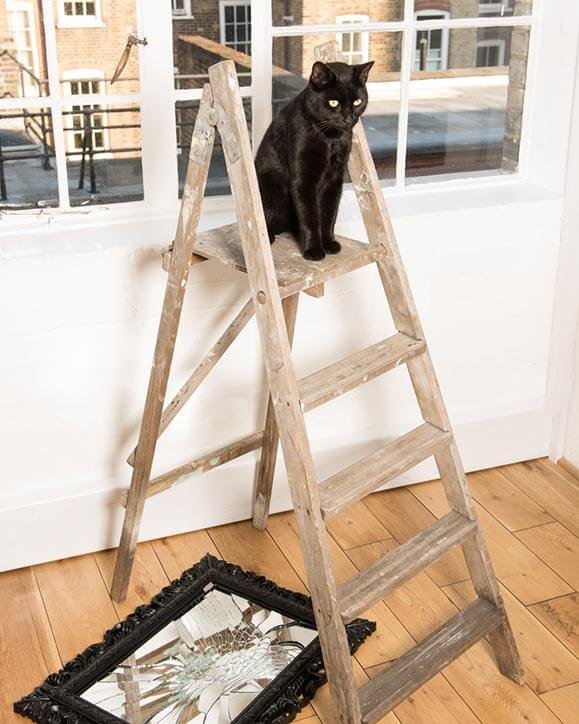 Although people from Belfast were most superstitious about walking under ladders than anyone else, it was actually breaking a mirror that was most commonly considered good or bad luck across the nation.

Of the 17 cities represented in our survey, breaking a mirror was the most commonly held superstition for 14 of them. Nationwide over half of respondents (52.2%) believed that a broken mirror would lead to bad luck.

When asked about the various superstitions, the vast majority of respondents considered them to be bad luck rather than good, however ‘seeing a black cat' was considered by more people to be fortunate rather than not.

Across the UK an average of 31.2% of respondents believed a black cat crossing your path is a sign of good luck, compared to just 13.8% who thought it was the opposite. The cities most likely to be pleased to see a black moggy were Belfast (39.5%) and Cardiff (40.5%).

As a part of Accident Awareness Week, we also wanted to show that black cats can bring good fortune by running this social media competition in London.