Like many things in 2020, Christmas might look a little different this year from the festive season we are all used to.

With Christmas celebrations limited to up to three separate households on the big day, one thing that we can all still enjoy as normal is settling down to watch a festive film favourite.

Here at National Accident Helpline, we have previously highlighted the accident and injury hazards the public should keep an eye out for when celebrating the Christmas season, but have our Christmas film favourites been showing the same level of safety awareness?

To see just which films have the most injury-prone characters, we analysed ten classic Christmas films, and logged each time a key character suffered an accident that would lead to an injury. We then took the official NHS guidance on recovery times to show the impact that all these injuries would have had, if they occurred in the real world. While the festive antics of these iconic Christmas characters are fun to watch, it turns out you should definitely not try to recreate their antics at home!

The analysis shows that many classic Christmas films should possibly come with additional danger warnings, given that a staggering 159 incidents that would lead to injuries are shown on screen across the ten movies we analysed. 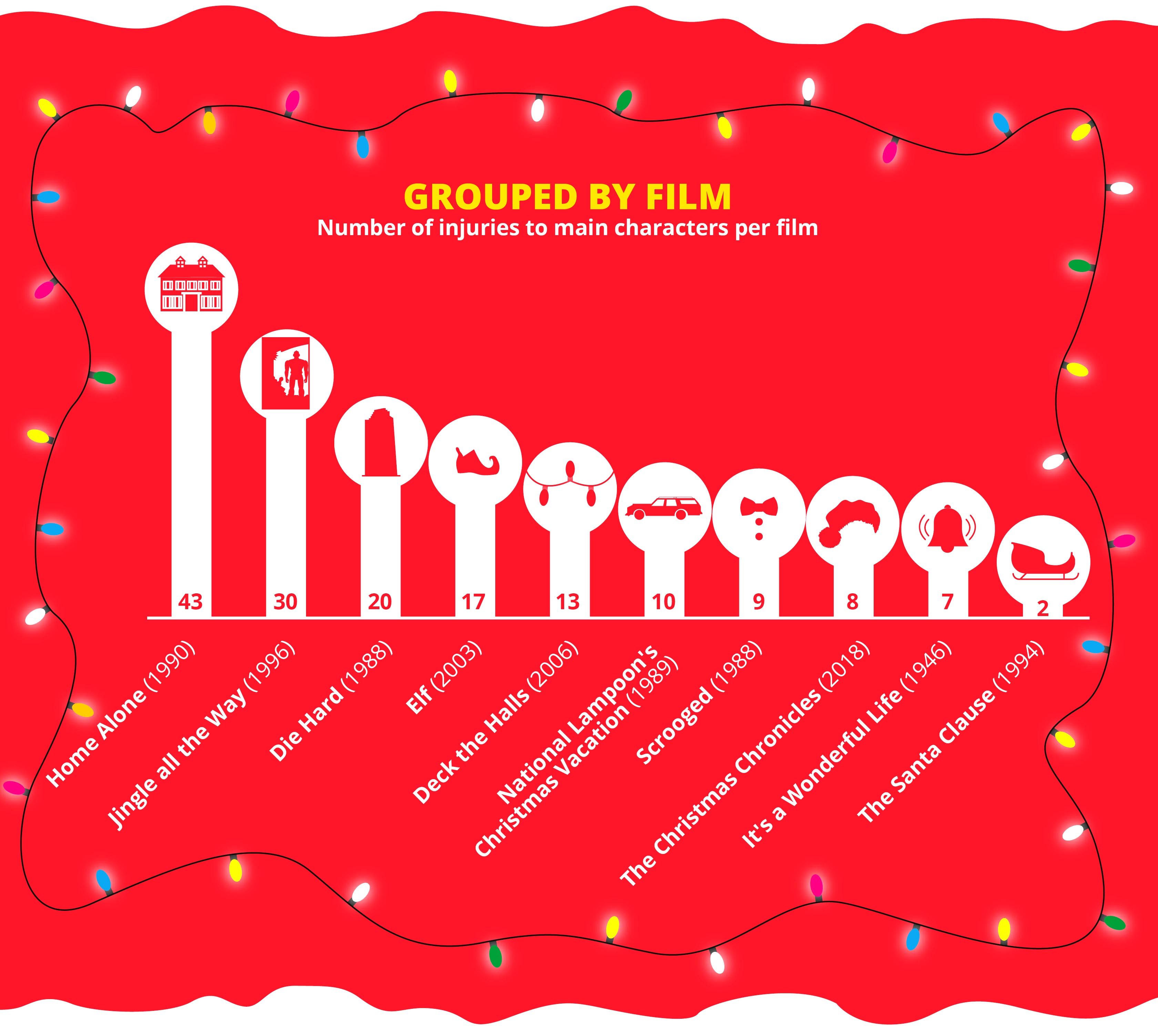 Perhaps unsurprisingly, Kevin McAllister's defence of his home from attempted burglary in 1990's Christmas classic, Home Alone, resulted in the highest number of injuries - 43 separate injuries depicted between the three key characters. When calculated against the film's running time, this works out as an injury occurring every 2 minutes and 24 seconds of screen time!

It turns out that life as an Elf is more hazardous than many would think, with Will Ferrell's Buddy from the 2003 film suffering only three injuries fewer (17) than John McClane sustained while  defending Nakatomi Tower from robbers in 1988's Die Hard (20).

The ‘safest' Christmas film on the list in terms of number of injuries was found to be 1994's The Santa Clause, with Tim Allen's character suffering only two injuries throughout the entire film. 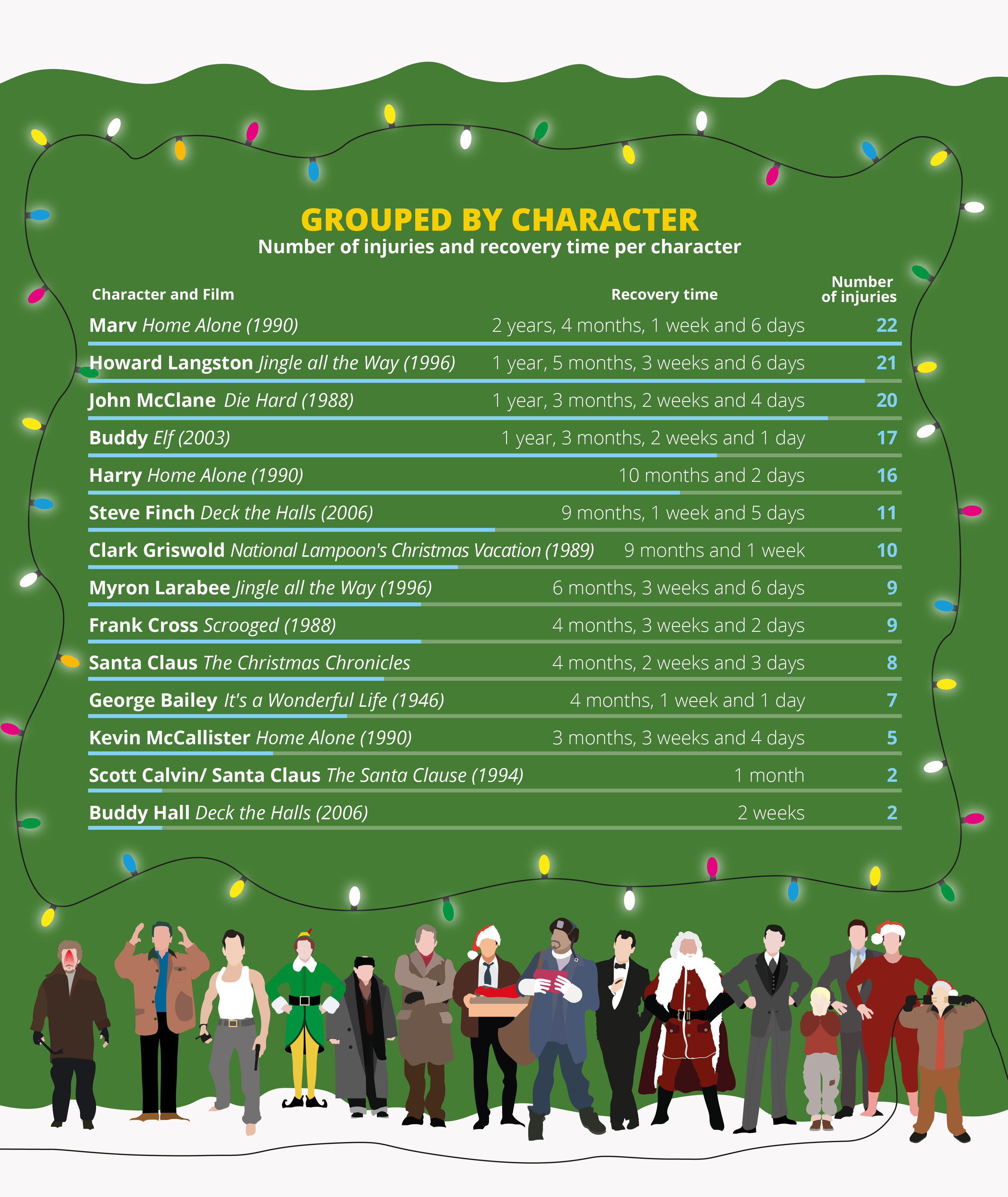 When it comes to the individual characters, Home Alone comes out top of the list again. Hapless intruder Marv suffers 22 separate injuries throughout the film, showing a big difference between him and his partner in crime Harry, who sustains just 16.

Ranging from sprains and back pain (from falling down icy stairs) through to cuts and grazes and foot pain (from stepping on glass baubles in bare feet) and even a broken nose and severe head injury (from being hit in the face with an iron), Daniel Stern's character would take a massive 2 years, 4 months, 1 week and 6 days to recover from the number of injuries inflicted during this Christmas classic. 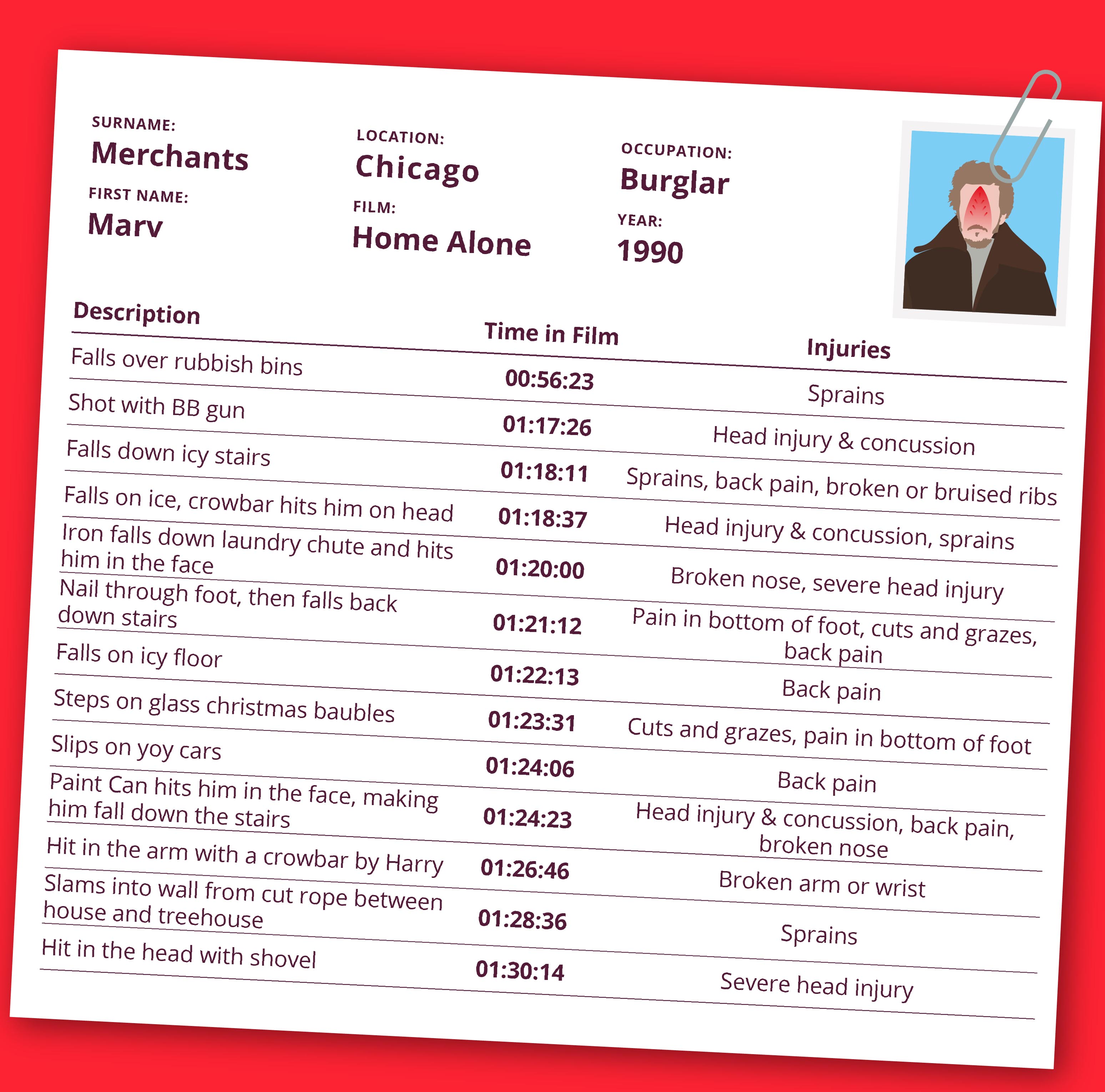 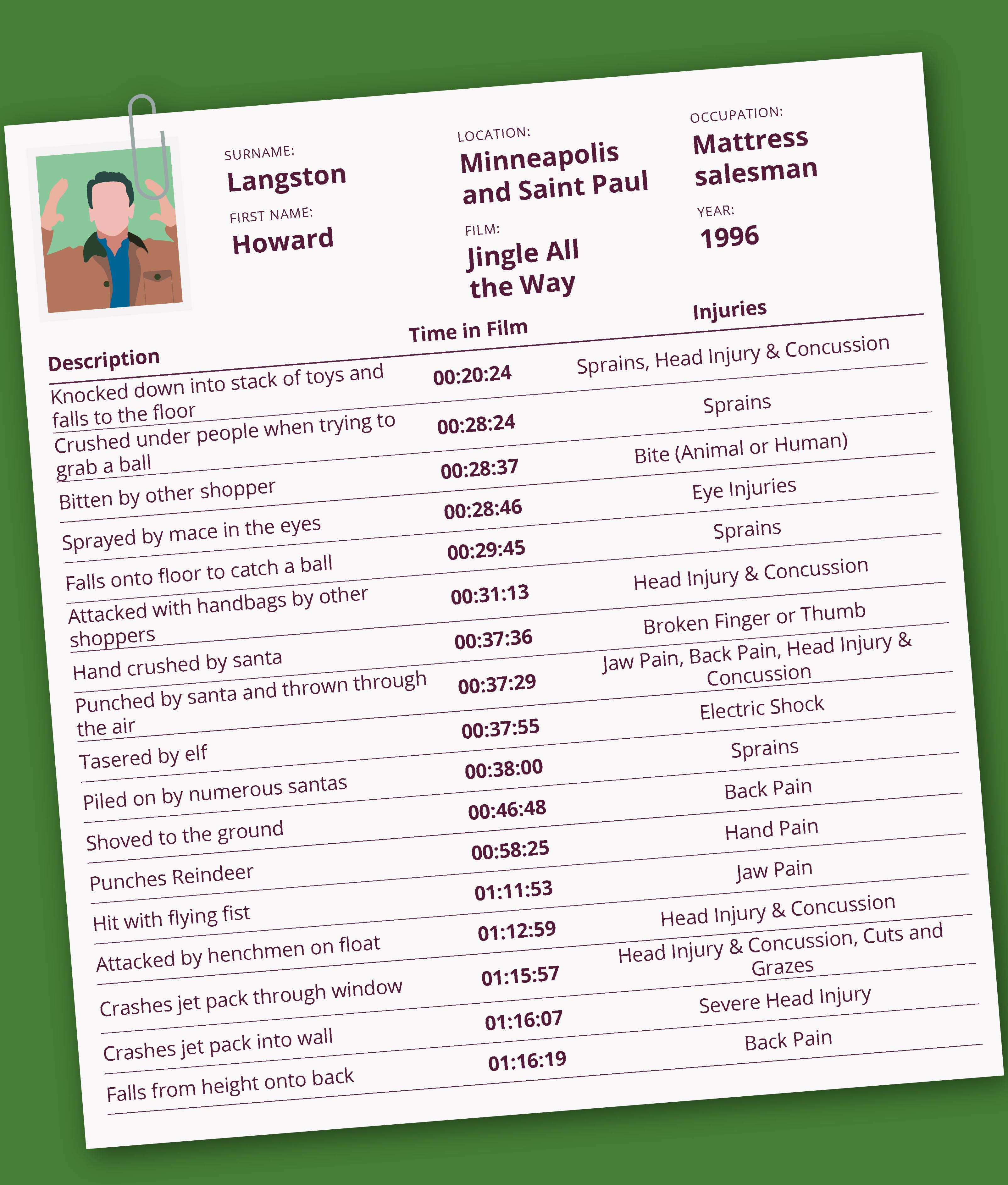 The analysis shows that Arnold Schwarzenegger's character Howard from ‘Jingle All The Way' is only slightly better off, with his calamitous pursuit of the prized Turbo Man toy landing him with 21 separate injuries over the course of the film. With injuries sustained including being bitten by a rival shopper, having his fingers broken by an angry Santa and suffering a head injury/concussion when flying through a window with a jet pack, the character would need 1 year, 5 months, 3 weeks and 6 days to fully recover.

There is debate each year on whether 1998's Die Hard should be considered a Christmas classic. However, with Bruce Willis's New York cop John McClane forced to defend a building from thieves on Christmas Eve, it takes pride of place in our Christmas film analysis.

McClane suffers 20 separate injuries as he progresses through Nakatomi Tower including broken/bruised ribs from falling down a set of stairs, cuts and grazes and foot pain from being forced to walk over broken glass in bare feet and even shoulder pain and cuts from being shot. Surprisingly, all these injuries still only place the character third in our recovery table, taking 1 year, 3 months, 2 weeks and 4 days to recover from his injuries. 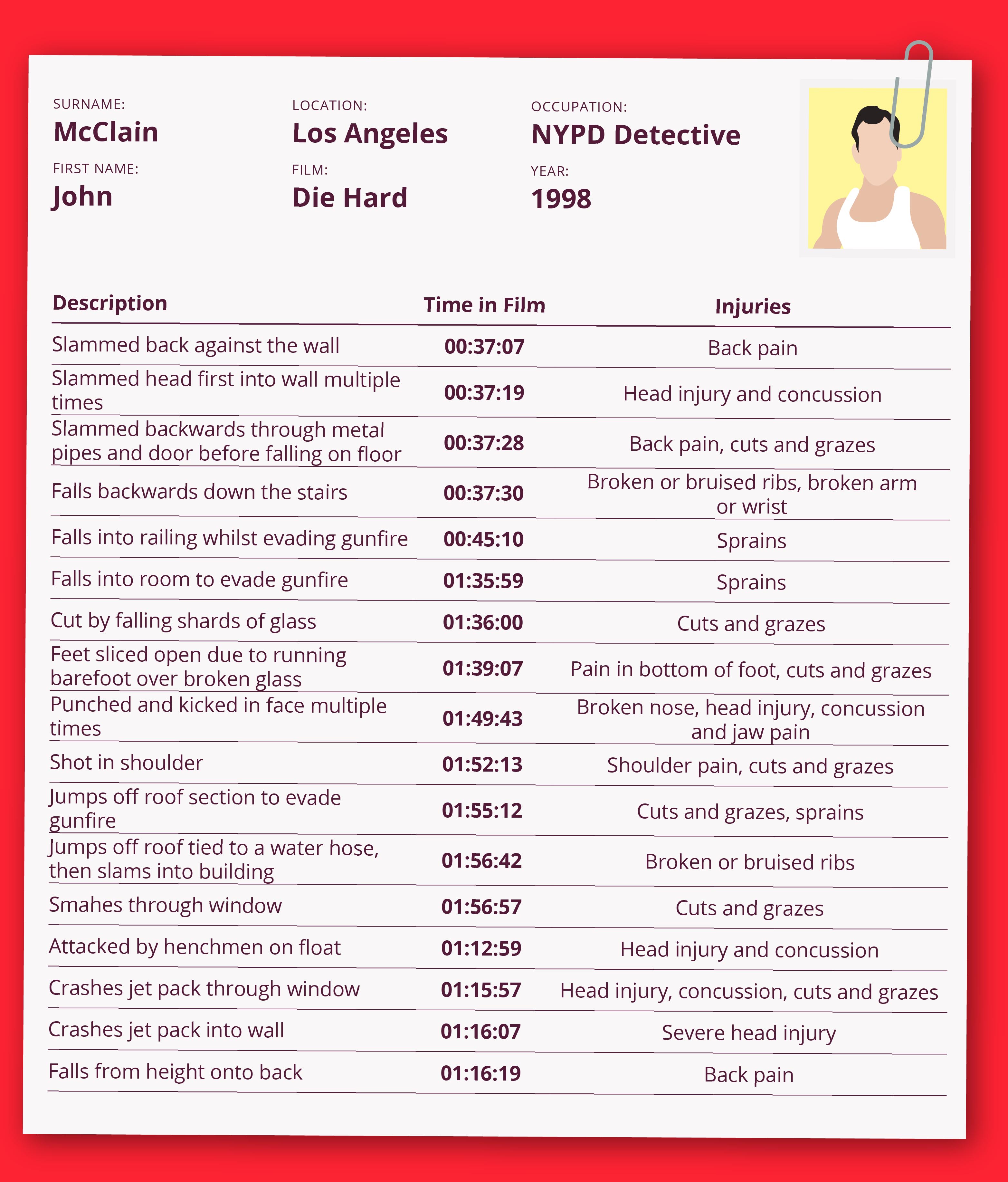 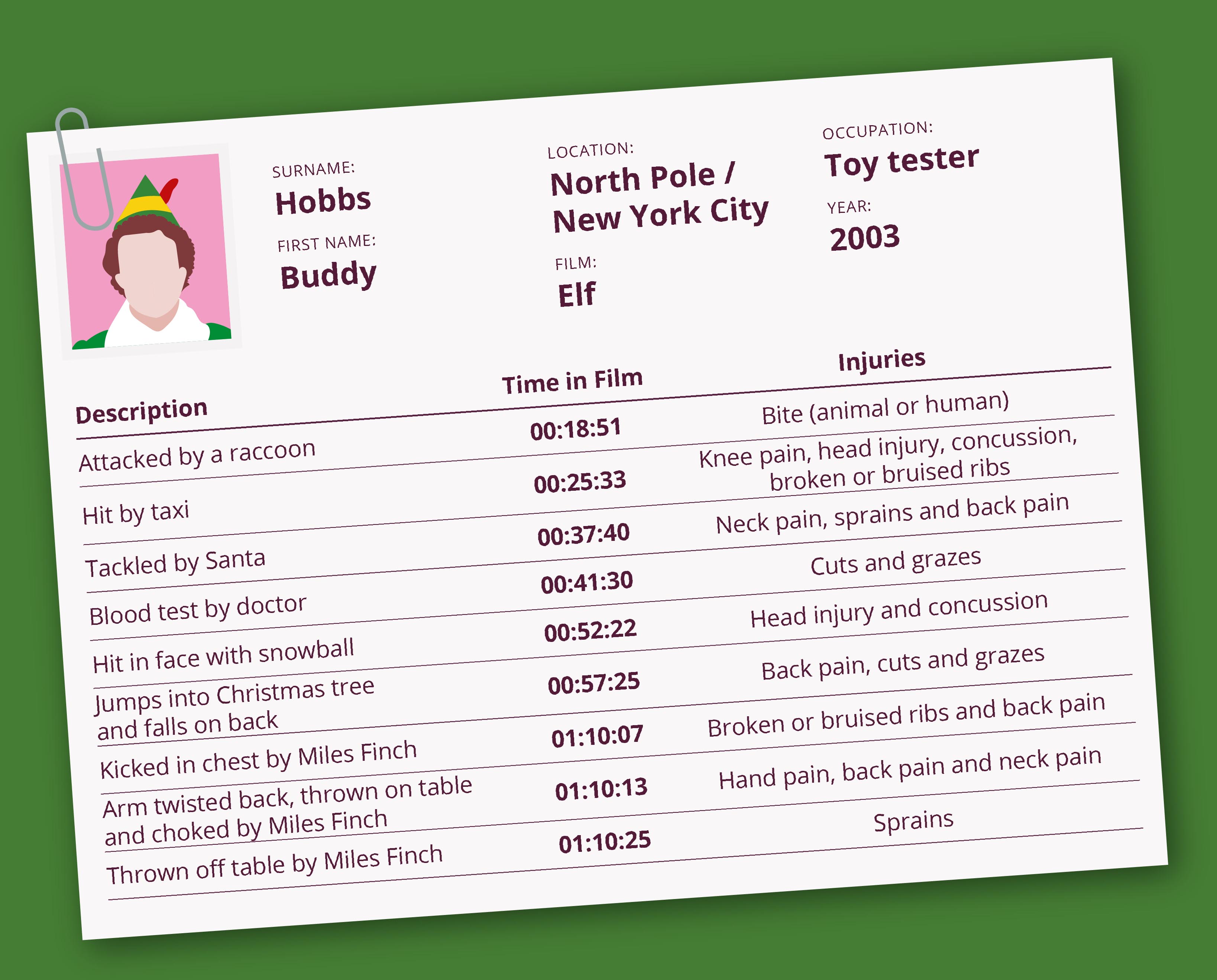 Rounding off the top four is another surprise entry, with Will Ferrell's Buddy from the 2003 film ‘Elf' sustaining 17 injuries across the film.

Buddy is attacked by a Racoon, hit by a taxi and attacked by a disgruntled children's author, resulting in numerous cuts and grazes, broken/bruised ribs and neck pain. Buddy would be fit and healthy for next Christmas however, recovering from his various injuries in 9 months and 1 week.

Looking across all ten films, certain injuries seem to occur more than others. Sprains were shown to be the most common Christmas film injury, with 29 different incidents of this in the films. 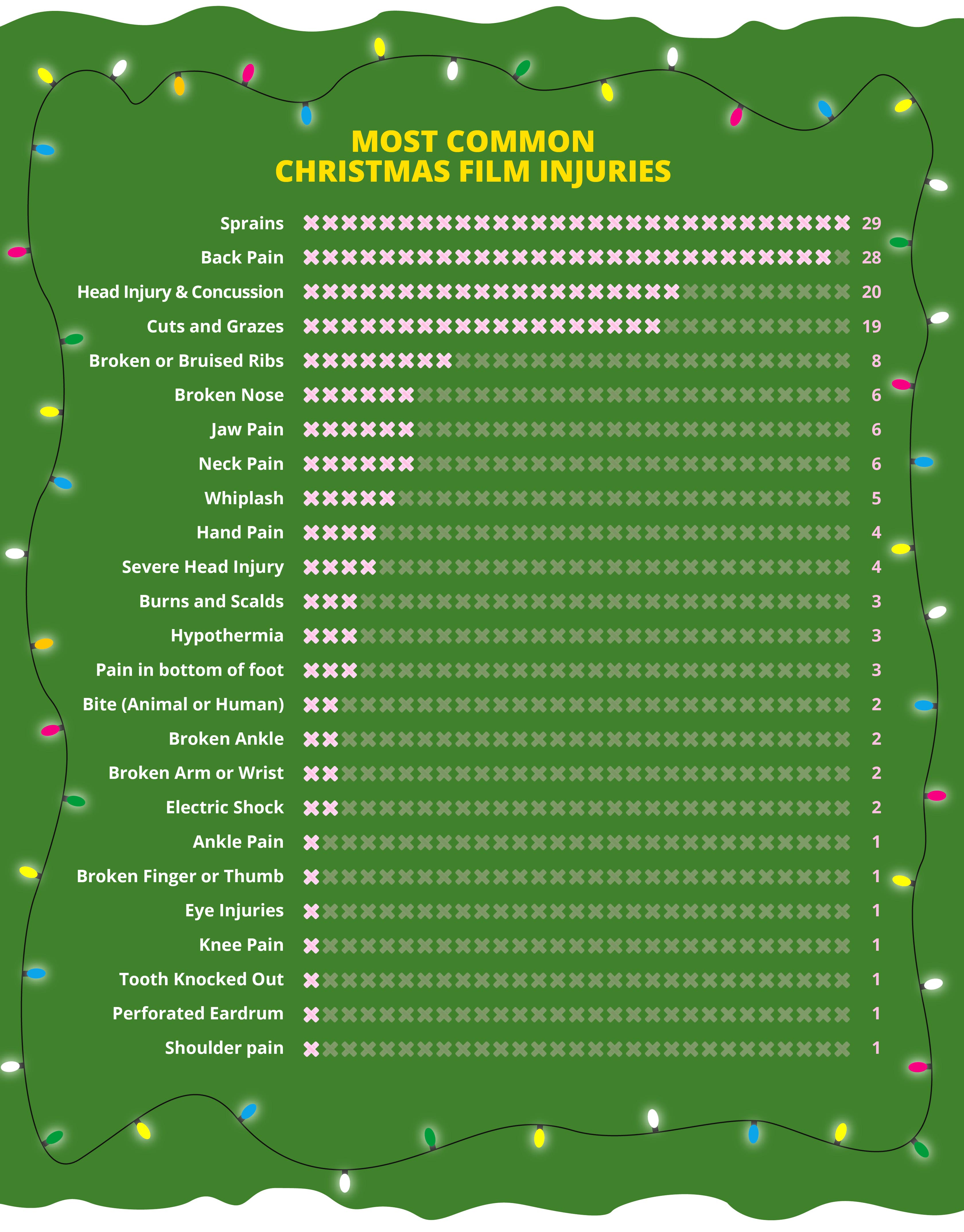 Back pain was a close second, with 28 different back injury accidents suffered by the characters and head injuries/concussions in third place with 20 occurrences.

While the injuries sustained in these classic Christmas films occur in a make-believe world, it does highlight the need for everyone to stay alert during the festive period. Even when dealing with busy festive period, by being aware of your surroundings and ensuring you are avoiding situations that could lead to injuries, everyone can enjoy the festive season and avoid any unnecessary trips and falls.

Following fears that workers’ rights are being dismissed in the construction industry, we’re launching our Rights on Sit...

Tackling the disparity in compensation f...

Four months on from the government’s whiplash reforms, we look at how the changes have affected compensation for back in...

Keeping safe on the roads

Data shows that road use is returning to pre-pandemic levels, but are we aware of what it takes to stay safe?